The Differences Between Indica, Sativa, And Hybrids; And Why it Matters

Join us as we detail the fundamental differences between these three groups and why it should matter to you. 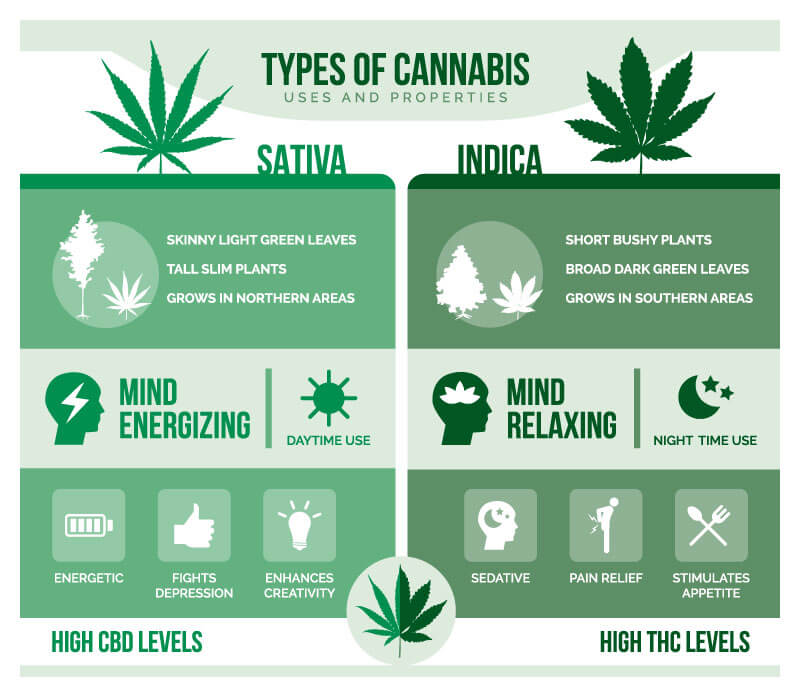 Due to their natural environment, Cannabis indica strains adapted certain characteristics that allow them to flourish in these seemingly harsh environments. Indica strains are known for their short and bushy stature, which allow them to branch out rather than grow tall. Their natural landscapes are void of tall trees that compete for sunlight, so Cannabis indica has large, broad leaves that soak in the light to fuel the photosynthesis process.

The flowers that indica strains produce are known to be small, yet dense. As with all forms of life, there’s always a reason behind every characteristic. The dense flowers found on Cannabis indica are due to the dry environments that they’re located in. This density reduces the amount of moisture lost due to wind, heat, and a lack of humidity. Dense buds retain a specific level of moisture to protect they seeds the develop within.

Cannabis indica strains are known to flower in a short amount of time. This is because they are in regions that have short summers and incredibly harsh winters. It’s a race against time to finish their lifecycle before the onset of Autumn; therefore, indica species complete their flowering cycle within 6-8 weeks.

Cannabis indica has a reputation for sending those who consume these strains into a deep state of relaxation. Although it’s still yet to be proven, scientists are beginning to think that the body-numbing effects of indica strains are related to specific terpenes that are commonly found in Cannabis indica varieties.

Terpenes are natural compounds found within many plants. The terpene myrcene is commonly found in high concentration in most Cannabis indica strains, and its main attribute is its’ sedative effect. Aside from leaving users in an incredibly drowsy state, myrcene is known to have medicinal benefits such as reducing inflammation and pain; as well as decreasing instances of insomnia and depression.

Due to the terpenes found within indica strains, the most common aromas are earthy, spicy, fuel-like, coffee, cocoa, and woody.

The taste tends to take on a similar thread as the aroma but becomes intensified as you inhale. If you’re partial to deep flavors such as those of espresso, coffee beans, and dark chocolate, then indica varieties are your best bet.

When you think of the tropics, what do you see? Green, green, and more green. This is because tropical landscapes are filled with competition. Every available space is covered by photosynthesizing plants trying to gain an edge over the next plant. Plants grow upwards towards the sun, and Cannabis sativa is no different.

This is why spotting a sativa strain from an indica strain is straightforward. Cannabis sativa strains grow in a Christmas tree shape, sometimes reaching 20-feet. Their overall structure is thin and delicate, and their leaves are long and serrated.

Flowers that are found on sativa strains are large and airy. They aren’t dense because of the high humidity levels found in this part of the hemisphere. If sativa strains were to have dense buds similar to that of indica varieties, they would be immediately covered in mold and fungi.

Similar to indica strains, terpenes play a significant role in the way we experience sativa strains. Limonene is a common terpene that’s found in citrus fruit, and it’s also the most common terpene found in Cannabis sativa.

Since sativa strains have a high concentration of terpenes found in fruits, they are known to have fruity flavor profiles. The same goes for their aroma, in which most sativa flowers will exude highly fruity scents.

If you’re a fan of citrus, berries, and all other exotic fruits, then a sativa strain surely won’t disappoint.

Hybrids have been created by crossing sativa strains with indica varieties. This pairing has created an entirely new category – hybrids.

In this day and age, hybrids are the most common cannabis strains that are available. Hybrids can be broken up into three categories: sativa dominant, indica dominant, and pure hybrid. When you walk into a cannabis dispensary, this is the category that you are most likely to find.

Hybridization has nearly destroyed all landraces (whether sativa or indica). This is why it’s incredibly challenging to find a pure landrace indica or sativa unless you travel to far-away locations.

Since hybrids are a cross between indicas and sativas, they exhibit an amalgamation of traits. Everything depends on the phenotype that they express once they begin to grow. Growing hybrids becomes less predictable because they’re loaded with a plethora of features from their sativa and indica lineage.

Hybrids are known to leave users with multi-stage effects. The onset may be similar to that of a sativa, where an intense euphoria dominates the first half. The second portion of the high is dominated by that of sedative effect common to indica strains.

Hybrids take the best of both worlds, leaving your appetite stimulated and your mind free of negative thoughts. Depending on the type of hybrid that you consume, you may find yourself more energetic or more drowsy. This is why it’s crucial to discuss the effects of each strain with a budtender while perusing a cannabis dispensary,

When indulging in hybrids, it’s best to consume small amounts to experiment with the various feelings that you’re likely to experience.

By combining indicas and sativas, cannabis breeders have unlocked an entirely new realm of flavor profiles and aromas. Hybrids are known for their complex and pungent smells, which comprise of sour fruit to chocolate covered hashish.

Now that you understand the inherent differences between indica, sativa, and hybrids; you’re fully equipped to purchase cannabis products with confidence. Each cannabis strain offers a plateful of aromas, flavors, and effects; so it’s essential that you take your time in exploring each variety.