Just about every person that enjoys using cannabis regularly has had at least one drug test scare. Hopefully, it didn’t completely destroy their future, but sadly this scenario does happen. Even though recreational marijuana is legal in almost 50% of US states, a positive drug test for cannabis can prevent you from getting a job, getting fired, or even sending you to jail.

Find yourself in a situation where you need to undergo a drug test can be terrifying, especially if your job or freedom is on the line. While there are dozens of home remedies online, they have traditionally been unreliable. However, we’ve recently come across a new method getting incredible results and has a plausible mechanism of flushing the THC from your system.

Drug tests administered by a new employer, a probation/parole officer, or your parents are most commonly issued as urinalysis. Unfortunately, weed can stay in the system for thirty days, making passing a drug test on short notice basically impossible. In this post, we will go over:

No method is 100%. Everyone’s body and metabolism are different. If possible, we highly recommend getting an at-home test 5 panel drug test to make sure you have clean urine. Tests are only $10-$20 and can be found at most grocery or drug stores. 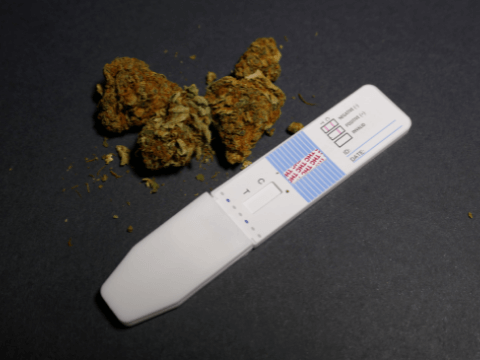 Tetrahydrocannabinol, colloquially called THC, is a psychoactive compound primarily found in Cannabis sativa. For those unaware, THC is the active ingredient in marijuana, most commonly known as ‘pot.’ THC is one of the over 100 chemical compounds known as cannabinoids that make up the cannabis plant. Cannabinoids are found in the flowers and cultivated for their intoxicating and medicinal properties.

Unbeknownst to many, some experts believe that smoking pot is not as harmful as smoking tobacco. Marijuana doesn’t contain any significant amount of harmful carcinogens, and if smoked in moderation, it may not have cancer-causing effects that tobacco has proven to cause. However, we don’t have the data to be sure. Scientists don’t know the long-term effects of smoking marijuana. In addition, the super potent weed that is being produced today has way more THC than the weed the hippies smoked. So even if we are to look at a lifelong smoker in 2021, it’s safe to say that they weren’t exposed to the same pot available today, and the comparison isn’t exactly apples to apples.

Researchers also don’t understand the relationship between THC and brain cells. While we don’t have any hard evidence proving THC kills brain cells, we can’t yet rule it out.

While cannabis is being reformed globally, it remains illegal in the majority of the world. However, the cultivation of pot is legal in many countries like Iran, Spain, and Switzerland.  Recreational and medical marijuana are legal in Canada and the United States but remains on the most drug screens. Weed can be bought in a store and was considered an essential business during the COVID-19 lockdowns but remains grounds to get you fired from your job.

How Do Urine Analysis Work?

When you take urine analysis (UA) drug tests, you must pee in a cup. The test is then sent to a lab, where they test for a variety of drugs. Most employer UAs are 12 panel, meaning they test for 12 different controlled substances.

In the case of a UA for THC, the drug test will screen for THC metabolites, not the actual cannabinoid. THC is only present in the body for a few days (depending on the person), but it takes up to 45 days to fully process the compound.

There are various THC metabolites present in the body long after the effects of THC wear off. Most tests screen for the THC metabolite THC-COOH because it remains in a test subject’s urine for the most extended period. 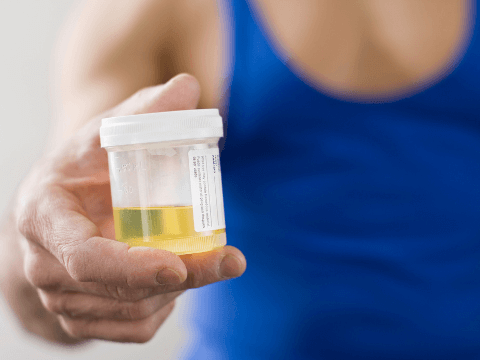 How Long Does THC-COOH Last?

THC-COOH can stay in your system for over a month. The amount of time is dependent on several factors, including:

Ways to Beat a Drug Test for THC

Before we get into how to pass a drug test with Jello and water, let’s go over some other potential methods. Of course, many home remedies are nonsense, but you may not have to do much to remove the drug metabolites from your urine sample, depending on your situation.

Stop smoking weed for a month, and your body will naturally process the THC, leaving you with THC-COOH free urine. However, the problem is that most people Google searching ‘how to pass a drug test’ don’t have the option of postponing the test for a month. 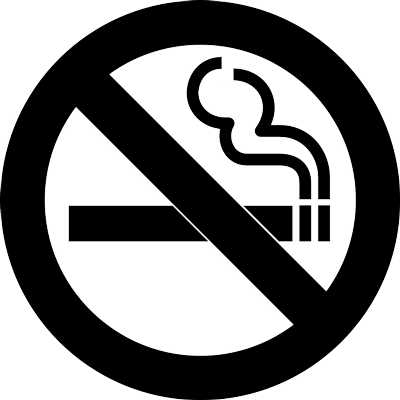 Drink an Excessive Amount of Water

Drink tons of water in the days leading up to the test. Not just water, drink as many fluids as you can. Stuff yourself silly with green tea and cranberry juice. These act as natural diuretics, promoting urination. Ultimately, the bottom line is – the more you pee, the more THC leaves your system.

This method will 100% work; if you pee enough, the THC metabolites will be flushed out of your system; however, your urine sample will give you away. Drug testing companies have seen every trick in the book, they know this is a common method, and fully transparent urine is a tell-tale sign that something is up.

Exercise, exercise, exercise! Exercising speeds up your metabolism considerably and helps your body eliminate traces of marijuana naturally. In addition, as you perspire, a certain amount of marijuana gets excreted from your body. This, again, helps decrease the detectable levels of the THC metabolite THC-COOH. 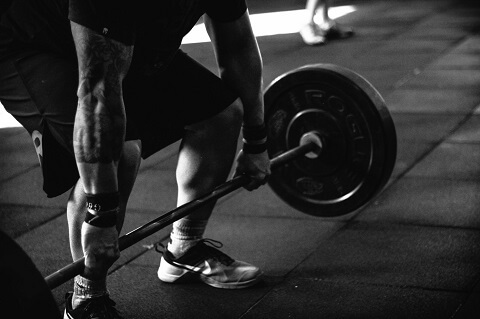 Some people also say that diluting your urine can provide an answer to all your worries. However, this must be done with caution since over dilution of urine can cause the other parameters like creatinine to show up abnormally low. If this happens, the test will be declared inconclusive, and you will need to repeat the test.

Dilution of your urine should be done so that you pass the drug test without the tester coming to know about the dilution. Hence, ensure the urine doesn’t look like water. We recommend using this method only if you have at least a week before the test and are a moderate smoker.

Products promising to flush your system can be a risky route to take. First, they aren’t guaranteed to work for everyone. Second, they also range in how they are flush the THC from your system. For example, some drinks operate the same way as diuretics like cranberry juice by promoting frequent trips to the bathroom; others add proteins and vitamins to the sample to deceive the lab test.

Detox kits also help speed up the metabolic process with herbal supplements taken over some time that remove the toxins from your fat cells. Another concern is that these methods will leave evidence that the results were influenced, such as lowering the density of the urine. When the kidneys are dramatically flushed out, it affects the urine sample. You run the risk of getting your test thrown out and having to take another UA.

Be mindful of the mechanism each product removes THC before putting your faith into it.

While the methods above have worked for people, it isn’t easy to distinguish how many of the anecdotal accounts would have passed the test anyway or used a combination of methods.

Another disclaimer: this following method to pass a drug test shows promise, many potheads will guarantee results, but we all know nothing is 100%.

Removing the THC in your urine can be done simply by using readily available products. The most commonly used product for this is fruit pectin. Many pot smokers swear by gelatin’s capability to get you to pass the dreaded drug test with flying colors.

How gelatin or fruit pectin works are simple. It can dissolve an extremely high amount of the drug into itself. Since gelatin is excreted when you defecate, it doesn’t show up in urine, and a good amount of cannabinoids are eliminated from your body, with no one being any the wiser. However, extreme caution must be taken when consuming gelatin. Excessive consumption can result in stomach upsets and severe diarrhea. 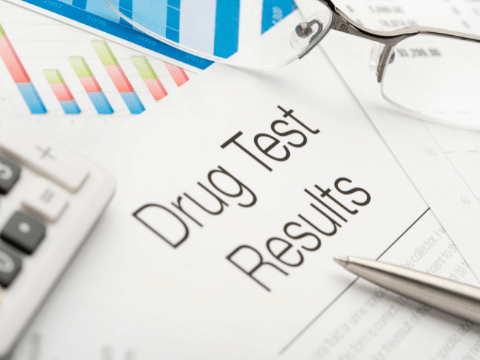 •          Creatine monohydrate –found at GNC or other supplement/vitamin shop.

How Does It Work?

Fruit pectin removes THC metabolites from your fat cells. The combination of Certo sure jell fruit pectin and water will speed up the detox process, leaving you with clean, undiluted sample the day of your test. Electrolytes from the sports drink and the creatine keep the test flagged after administering the sample.

If you’re operating for only a few hours, eat a packet of sure jell, drink the 32oz electrolyte drink along with 32oz of water an hour before the test.  You won’t need the creatine because you haven’t flushed out your system with water.

For those of you with a little more time on your hands, at least a couple of days, follow the instructions below for the best results.

1.         In the two days before the day of your test, drink as much water as possible. Don’t worry about diluting your sample; we take care of that part with the electrolytes, vitamins, and creatine.

2.         The night before the test, mix one pack of sure jell with your first 32oz Gatorade and drink it before going to bed.

4.         Two hours before the test, mix the second pack of Certo with your remaining sports drink. Consume the mixture along with a serving of creatine and multivitamin. Make sure to drink your Certo/Gatorade mix at least an hour before the test.

Each part of this method has a purpose. While the Certo removes the THC metabolites from your body, the creatine, electrolytes, and multivitamin play an equally important role in the grand scheme of things. Most people who fail to pass their drug test leave out one of the critical steps to this home remedy.

While nothing is guaranteed, the fruit pectin is the best home remedy we’ve seen online. Flushing the system with Jello and water has been used by countless desperate cannabis users and could work for you too.

The downside to this method is that you can’t test it. Of course, you could take a home test after drinking your second fruit pectin Certo packet, but by that time, it’s too late to explore any options if you fail the test.

As the world slowly inches toward accepting cannabis use both legally and socially, a surprise drug test remains a nightmare situation for a regular user. Hopefully, we will reach a point where THC is treated more reasonably, but progress is slow-moving.

We have recently witnessed the USADA undergo public scrutiny after banning track star (and future cannabis icon) Sha’Carri Richardson after a positive test. Major corporations like Amazon and the NBA have discontinued testing for THC. While we know that doesn’t help you remove the THC-COOH from your urine, it’s nice to see the tides turning.

We’ve heard from numerous people that have had success with all the methods mentioned, however, none are scientifically proven to work. These are simply some of the commonly tried and tested, and in many cases, successful, ways to pass that devious dastardly drug test.